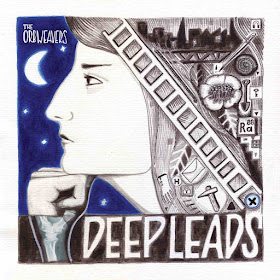 Borne into a Melbourne Spring, Deep Leads is album number three by The Orbweavers - six years in the waiting.

On the surface there is a certain effortless, gentling quality within The Orbweavers songs, but one doesn't need to dig deep to find some quite disturbing concerns - many songs here are shadow borne.  As always, The Orbweavers songs are imbued with metaphor, mining veins of symbolic allegory. The environment, mans place in it and his refusal to yield - instead to control and dominate feature often amongst Deep Leads songs. Country, above and below, ancient and now - check out Blue Lake.  Love lost, buried, forgotten...and remembered - best forgotten, inspire The Reply. Poisons, man-made and botanic - deadly and protective feature in Poison Garden. Seasons, creatures, the ocean and land conjoin human feelings like leavening. You know, in parts I was reminded of the feel of  Daniel Lanois' Acadie, it shares a similar hearth like, comforting warmth, despite its sometimes melancholic narratives.

Songs like Until, The Dry and The Hook lend the album a journal like quality, where personal fragilities sorrow. Speaking of journal references, its worthwhile purchasing the vinyl edition, because Marita and Stuarts artwork really sings. Until, the albums closing song, features a location recording of various amphibian and avian calls, chorusing the quiet. This reminds me of Rising Above, the closing song on 2011's Loom which featured the hallucinatory, spatially disorientating spell of bell miners song.

Cyclamen has a gorgeous Bossa-Nova samba'd lilt, a dedicatory song to a plant sacred to Hecate. Funny you know, it lends those contained flowers on the kitchen window sill at grannies house another more intriguing identity - did gran know? Having recently clapped eyes on these in the wild, I decided I preferred them there than pot bound, where they are rendered...well, twee - figures, in light of Hecate's dominion. The chorus in Cyclamen is alike an incantation, beseeching insight in the depths of sleep. It's followed by Poison Garden, another dreamlike song, with Dennyesque tinged hallucination - insights and exits through plant allies, and executioners. Harps cycle briefly and a womens chorus coos in the brief poetry of Nitrates.

Hell, they cover corporate cover-ups in the bittersweet, languid charm of Radium Girls, based on the true story of United States Radium Company's cover up of the poisoning of young women workers. The corporation obfuscated court proceedings. Fabrications that the girls had contracted syphilis and were of unsavoury character were created by lawyers. Proceedings were stretched out so as many women as possible died before the inevitable settlement. Cigarette anybody? Check out the vid at Youtube.

That's but a small selection of some of my favourites - tell you what, check out what The Orbweavers have to say about Deep Leads - here.