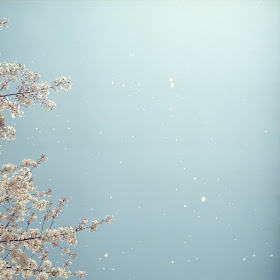 I enjoyed an ep by Heine Christensen, aka ghost and tape titled Poble Nou back in 2014. Its sound featured a hypnotic blend of swelling pitch, crackle, bell tones and guitar, rising and falling throughout the mix. There are moments where the beautiful tones of the Kantele appeared. With its origins in folk music, the kantele sounds here were instead placed within the aforementioned sound-field of warm ambiance - it lent the album a whisper from a world apart. It's a lovely ep and was released on the Home Normal label.

Three years forward, and ghost and tape have released album number four - Vár.  Vár translates as spring and is derived from old Norse - the word symbolises new beginnings. Vár is also the name of the goddess that oversees oaths made between people - she punishes those that break them too. New beginnings. Sweetly, it's spring from where I listen. The apt cover sees blossom laden branches reaching across a soft blue sky, the suns halo beams from above. Petals drift. It is released on the consistently great Home Normal label. The music has a very organic feel to it with an eye for detail that really colours the music with subtlety and nuance.

There's a wonder within Vár, a dreamlike wonder - particularly within solsort (blackbird). Bell tones sound in the distance and closer by. A voice like tone cycles and reminds me of the angelic song on Budd/Eno's Plateaux/Ambient 2.  A violin like refrain too adds another layer to the detail. It contains a beautiful tension created by the gentle ebb and flow of low intensity drones - like humming industrial noise. Cricket like song morph. A blackbirds song trilled through my window.

Vár is suffused with a fragility. Sounds flicker and fade like chrysalids shifting from earthbound dormancy into a brief moment of flight to seed another cycle. The albums title track sounds this beautifully, all the while hazed by sunlight. Anemone follows a similar theme, all crackles and whirring within a viscous swell that has shades of a harmonium. Anemone could equally tell the tale of a shaded woodland punctuated by sunstream dapple and clusters of anemone flower; or of a pelagic world, where shafts of light illumine the tide shifting tentacles of their namesake. This song has the aforementioned kantele like tones sounding within it.

Location recording and nature sound herald hatch - a kind of bell and gong tone poem. Layers of sound build upon each other - exterior streetscape sound; a blurred cycling drone; sound ephemera. All these sounds and sources conjoin into a beautifully rendered, impressionistic meditation. It ends abruptly, a sweet foil for the person I lost in the listening...me.

...that's my impressions of some of the music on Vár - there's a bunch more songs to explore. I heartily recommend you do so.

As always, the presentation and packaging of Home Normal's discs is subtle and minimal - it's where the music is at too, though complexities are by no means absent - they just don't beat you around the head with their delivery. Rather, invite. Vár releases amongst a flurry of activity from this recently reinvigorated label.